“Because the paths to the Lord are inscrutable
Because the essence of His forgiveness
Lies in His word and in His mystery
Because although God sends us the message
It is our task to decipher it
Because when we open our arms
The earth takes in only a hollow and senseless shell
Far away now is the soul in its eternal glory
Because it is in pain that we find the meaning of life
And the state of grace that we lose when we are born
Because God, in His infinite wisdom, puts the solution in our hands
And because it is only in His physical absence
That the place He occupies in our souls is reaffirmed”

Rest in peace Shelby. You beautiful soul. You are forever loved and missed. You touched so many lives. You changed my life. I will do anything I can to help your dream for the Soul Healing Love Magic arts collaborative to live on forever. What a beautiful dream. 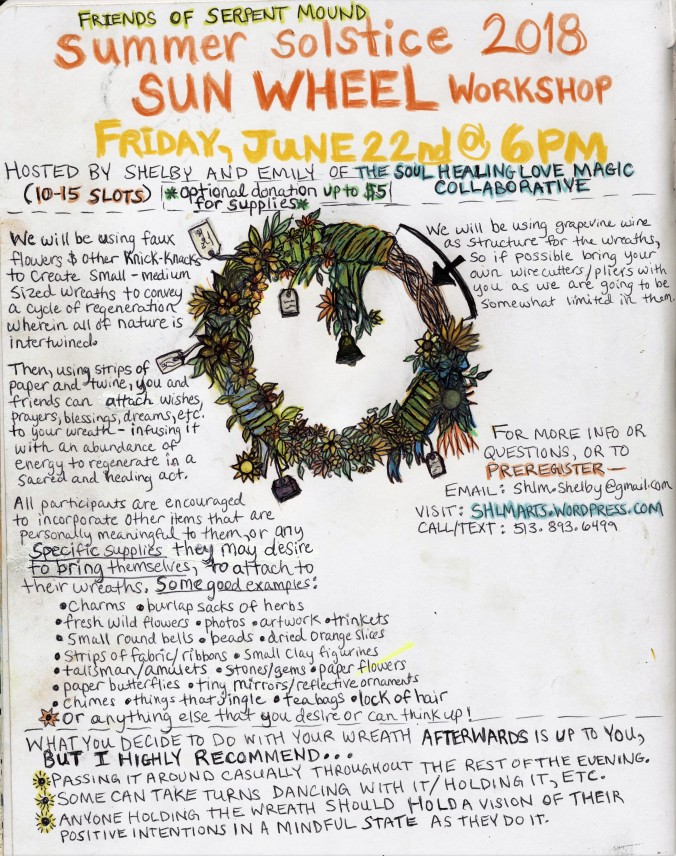 Click here to add this event to your Google Calendar

The SHLM Collaborative will be at the Serpent Mound Summer Solstice Festival to provide a Sun Wheel Workshop. We will be using faux flowers and other knick-knacks to create small-medium sized wreaths to convey a cycle of regeneration wherein all of nature is intertwined. Then, using strips of paper and twine, you and your friends can attach wishes, prayers, blessings, dreams, etc. to the wreath; infusing it with an abundance of energy to regenerate, as a sacred and healing act. There will be about 10 to 15 slots. Optional Donation of no more that $5 to help pay for supplies is very much appreciated. 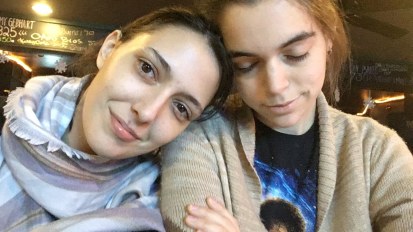 Hosted by Shelby and Emily, co-founders of SHLM Arts.

Preregister and Reserve a Slot for this Workshop

Ironically, I also ate Chinese take out that night, and the fortune that I received from my cookie was just way too fitting for me not to include it. Pasted to the side of my new moon, you’ll notice it reads: “Accident is the mother of invention.”

The Significance and Meaning of this New Moon to us:

My Prompt/Challenge for you tonight is to affirm to the Universe your own intentions and goals for this new cycle.

You can approach this prompt anyways you like, but I will be drawing my personal intentions inside a giant circle (representing the New Moon). I encourage everyone to use that template in a way that works best for them. For example, you could write/draw your intentions, affirmations, and goals within a drawn circle however you see fit. What’s most important is that you gain a sense of personal development or discovery; a kind of self-meditative experience.

Using Photoshop or other imaging software?

*Designed by Freepik from www.flaticon.com*

The Significance and Meaning of this New Moon to us:

My Prompt/Challenge for you tonight is to affirm to the Universe your own intentions and goals for this new cycle.

You can approach this prompt anyways you like, but I will be drawing my personal intentions inside a giant circle (representing the New Moon). I encourage everyone to use that template in a way that works best for them. For example, you could write/draw your intentions, affirmations, and goals within a drawn circle however you see fit. What’s most important is that you gain a sense of personal development or discovery; a kind of self-meditative experience.

Using Photoshop or other imaging software?

*Designed by Freepik from www.flaticon.com*

Soul Healing Love Magic will now be hosting a live collaborative canvas, which allows multiple people to draw/write/chat on a single canvas in real time. It’s free and anyone is welcome to join our public sessions, which will be kept open as much as possible and saved for the next time. There is no need to sign up for an account, it’s very simple to access.

In the list of Public Sessions, find ‘Soul Healing Love Magic’ and click on it, which should automatically open DrawPile. Type in any username you’d like and join the session. That’s all there is to it.

I will be announcing whenever sessions are going to be starting and whether a session is open through the Shared Canvas Collaborative page and social media.

On Saturday, my husband and I were lucky enough to snag tickets to ‘An Evening With Kevin Smith’ at Madison Theater down in Covington, Kentucky. If you’re thinking to yourself, “Silent Bob?” then, yes, @ThatKevinSmith. I never imagined that the man who is most recognized as Silent Bob could be quite so insightful, but much of what he spoke about is the same general message that Soul Healing Love Magic attempts to deliver here. Be vulnerable. Push boundaries. Find what scares you and do it, because what scares you is bait to the imagination. I admire the ways in which artists like Kevin Smith allow themselves to be so exposed, raw, and candid with their audience.

Sure, I could just sum up the night as a celebration of nerd culture and arbitrary high points of the evening – which began with an impromptu wedding performed by Kevin Smith in front of the crowd. Hilariously, he had the couple quote the Green Lantern Oath rather than the traditional marriage vows. But I’m not going to do that. If you’d like to read an accurate review of the night that talks about those things, check out this CincyMusic article by Andrew Risch. Kevin also mentions notable experiences he’s had while in Kentucky, such as his visit to Video Archive and The Overlook Lodge (both local bars that are fantastically original). Apparently, in his own words, “the VHS is making a comeback!”

Most of what I gathered that night were hastily scribbled notes written during the show in my visual journal, as you can see in the photo pictured here (please excuse my misspelled words and other errors). Basically, I am quoting certain things that he said that really resonated with me or the message that I got from him. There isn’t really any rhyme or reason to the order in which I’m quoting him (anything I’ve added as my own commentary is in italics), but this is what I wrote:

The evening was resoundingly inspirational for me, but probably will have been even more of a meaningful experience for my husband, Kristian Quino. He is a cinematographer and went in hopes of asking a question, standing in line at the aisle during the majority of the show. I’m astonished that he managed to have his question answered, and it was the very final question of the night. Kristian explained that, as a cinematographer, he’s at a point in his career where he feels it’s stagnating, and asked if Kevin Smith could offer any advice to him. When the rest of the audience started to stir, Kevin told everyone to listen because this was “actually a very important question.” His advice was something to this effect: Don’t try to get it back because you won’t. Reboot. Try something completely new and different. You’re an artist, so go in a new direction and figure it out what it is you enjoy and go with it. Don’t try to recreate what you’ve done in the past and look forward as an artist. Reboot.

Ironically, the journal (pictured) that I was writing in during the show had one of Kristian’s business cards glued to the back page and I had to pull it off when we realized that all of his other cards had been left in the car. So, Kevin Smith, if you’re reading this, we apologize for the gluey mess over the logo on the back of the card and completely understand if it ended up in the trash. We’d be more than happy to send you another one, though. I also want to thank you for telling my husband what I’ve been trying to convince him of for a long time; but he finally heard it and understood when it was coming from you. I haven’t seen him truly inspired like this in a long time, so your advice really means everything in the world. You reminded him of the fact that he is an artist, which is something I’ve never really heard him call himself before. Thank you and I hope that you enjoy the fanart that I’ve drawn for you.

As a visual artist, I try to live by the same way of constant creative experimentation and I think the advice that Kevin Smith offered to Kristian is relevant to any artist because we all reach points in our lives where we feel stagnated. This is one of the main reasons for the creation of Soul Healing Love Magic, to prompt an artistic process and to incite new perspectives. Sometimes we have to get out of our own heads in order to truly get into our heads. An Evening With Kevin Smith definitely reiterated that idea for me. 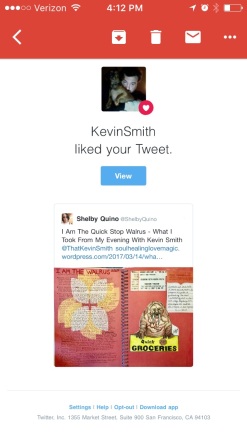 Ideas Submitted by Our Readers/Contributors:

Have another random act of art to add to the list? Comment and I’ll add it here.

“Put a drawing or a message in a bottle and launch it in the ocean or a river. It could end up anywhere at any time. Seal the lid with wax so that it does not leak. These have been known to travel for hundreds of kilometres.” – Submitted by Kat

“Works of art, in my opinion, are the only objects in the material universe to possess internal order, and that is why, though I don’t believe that only art matters, I do believe in Art for Art’s sake.“

(Sorry for the poor audio quality. The music is actually from one of my karaoke videos.) To watch the original video of me singing ‘1979’ by the Smashing Pumpkins, go here: https://youtu.be/mLoaNN5TTf4

This was my original entry, posted a month ago:

Tomorrow my SHLM co-founder, Emily, and I are going to Megan’s for a weekend of Soul Healing Love Magic, painting, spirits and more. Megan is another person that has helped to found SHLM and I guess you would say that she has a place on the board. We’re essentially the “Soul Healing Love Triangle.” :p

I’m not sure about Emily, but I’ll be staying  there until Sunday painting nautically themed pieces to go with Megan’s nautically themed house. Throughout the weekend I’ll be posting photos, videos and going live on Instagram, Facebook, and Twitter. I’ll also be writing a blog on Monday to share all of the Soul Healing Love Magic here, so look out for that!